The Oki Marine Biological Station (Oki MBS) is located in the Oki Island (Dogo), 60 km north from the main island (Honshu). The ecological and cultural features of this island are unique enough to be certified as the Oki Islands UNESCO Global Geopark and utilized for educational and academic activities the marine station provides. We own three marine vessels (Galatea, 7.3 tons; Pandion, 1.3 tons; Misago, 1.2 tons), which are utilized for observations and collections of various organisms around the islands. Accommodation facilities including a kitchen as well as lecture rooms and equipments for field studies and snorkeling are also provided for the visitors and researchers.

The Oki MBS of Shimane University was constructed on July 5, 1974. Thereafter, in March 1982, another building was constructed with student training rooms (2 rooms) and accommodation rooms (4 rooms), becoming the accommodation capacity of 40. In October 1995, the station transferred to Faculty of Life and Environmental Science of Shimane University by reorganization, and in April 1997, the Education and Research Center for Biological Resources has been established as two departments of Forest Science and Agricultural Science were joined with Marine Bioscience division.

On the research front of the Oki MBS, taxonomy and ecology of seaweeds have been studied since its establishment, and currently three station staffs primarily engage in the fields of animal ecology, development and evolution. For student education programs, the summer field courses are mainly conducted for students in the department of the Faculty of Life and Environmental Science. We offer several courses where students involve field collection of marine organisms, clasification and observations of collected specimens, experiments in animal physiology and behaviors. In addition, two courses were designed to recluit students from other universities. The credit-exchange system among Japanese national universities has been settled by our station with Okayama University in 1974, and then with Kobe University in 1973. Now, practical training courses hosted by the national university’s marine stations have been provided to all universities regardless of differences between national and private. 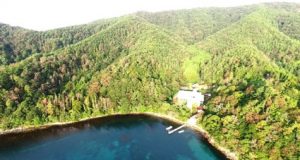