The center was founded in 1924 as the Asamushi Marine Biological Station, Faculty of Science, Tohoku Imperial University. It was reassigned to the Graduate School of Life Sciences in 2005 and changed its name to the Asamushi Research Center for Marine Biology in 2010. The center is located in the Asamushi hot spring resort, an area along the Mutsu bay in the northern end of the Japanese main island. It has a main research building, biological culture facilities, a dormitory accommodating up to 40 people, a guesthouse for long-term visitors (3 rooms) and 2 research vessels. The total number of visiting researchers and students is approximately 2,500 annually. The center has a long history in basic biological research focusing on marine organisms, such as the physiology and ecology of Paracaudina chilensis, a sea cucumber known as Hatai’s Shiro-namako (Shinkishi Hatai), the development of the spawning induction method for breeding Japanese scallops (Gotaro Yamamoto), research on the life cycle of the moon jellyfish (Etsuro Hirai and Yoshiko Kakinuma), the study of planktonic diatoms (Seiji Kokubo), the discovery of Janus green granules in the fertilized eggs of sea urchins (Isao Motomura) and the study of the spawning mechanism of tunicates (Takaharu Numakunai). The current research in the center focuses on developmental biology, comparative embryology and cell biology using marine organisms such as ascidians, sea urchins and jellyfishes, marine ecology and the systematics of water bears. The center was certified in 2011 as a Joint Usage/Education Center for Marine Biology by the Ministry of Education, Culture, Sports, Science and Technology. 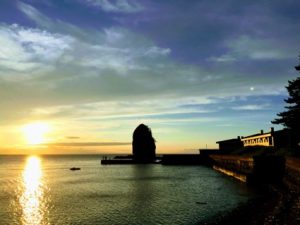