The Field Science Center for Northern Biosphere, Hokkaido University, was established in 2001 as one of the research facilities of Hokkaido University by integrating 16 research facilities affiliated with the Faculties of Agriculture, Sciences, and Fisheries. The primary aim in creating this Center is to develop a new area of scientific inquiry called “Field Science.” For that, the center conducts comprehensive research primarily on the northern biosphere focusing on the conservation processes and mechanisms that impact biological diversity and ecosystem processes, the sustainable use of these components, the long-term monitoring of the field science center’s ecosystems, and any relationships among these elements. We integrate these research topics to assist in the management of these diverse ecosystems (forests, rivers, lakes, agricultural farms, and coasts). The Center provides extensive resources for undergraduate and graduate education in our university and also for domestic and foreign researchers.
The Center is a part of the Education and Research Division of Hokkaido University. The main offices (Research Station, Technical Office and Administration Office) are on the Sapporo campus of the University, and the 16 field facilities are located in Hokkaido and Wakayama 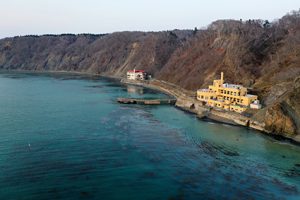 Akkeshi Marine Station was established in 1931 to conduct biological research on marine organisms in cold-current ecosystems. It is situated on the shore of Akkeshi Bay facing the Pacific Ocean, in the eastern part of Hokkaido. Akkeshi Bay, which is influenced by the cold Oyashio Current, has rich marine fauna and flora that are distinctly different from those found around other marine biological stations in Japan. Studies on marine ecology and biological oceanography are being conducted for various types of ecosystems and organisms. Most notably, research on the interactions between land and marine ecosystems has been carried out intensively. Various types of educational courses are held here focusing on ecology and biology of marine fauna and flora. Open courses in marine ecology and biological oceanography are also held in the summer for graduate and undergraduate students including international students. 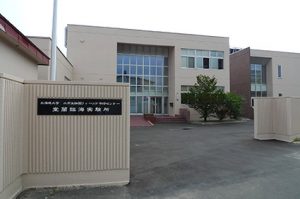 Muroran Marine Station (formerly, The Institute of Algological Research, Hokkaido University) was founded in 1933, and a new building, including facility accommodations was completed in 2012. The coastline of Muroran is rich in marine flora and fauna due to the influence of the cold Kurile Current and the warm Tsugaru Current. Over 200 species of marine macroalgae have been reported, and several species are growing at either their northern or southern limits. Recent research using macroalgae focuses on (1) molecular and cell biological studies on fertilization and development, (2) physiological studies on the mechanism of morphogenesis, (3) improvements on the gene transfer technique, (4) nutritional physiology. Educational courses on phycology, including taxonomy and developmental biology for undergraduate students of Hokkaido University, are conducted during the summer. Similarly, open courses for undergraduate and graduate students of other universities including from foreign countries are held every summer. 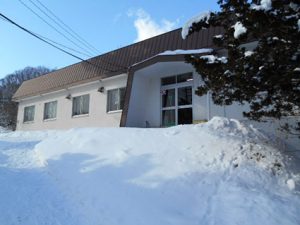 Toya Lake Station (ca. one ha) is the only limnological station in the Field Science Center for Northern Biosphere. It was originally donated by Toya Lake Fisherman’s Association to the Hakodate Higher Fisheries College, the predecessor of the Faculty of Fishery Science, Hokkaido University, as a lacustrine sockeye salmon hatchery in 1936. The Station has a research building, a guesthouse, and a fish farm. Every spring, about 20,000 fingerlings of lacustrine sockeye salmon are released into Lake Toya through a fishway (an artificial river) after a fin is clipped to mark them for later identification. Lake Toya is a large oligotrophic caldera lake with an area of about 70 km2 in the Shikotsu-Toya National Park, and is periodically (a 25-30 year cycle) affected by the volcanic eruption of Mt. Usu. The station provides visiting students and researchers with an educational and research field in a freshwater environment. At present, the following three research projects are being conducted: (1) a fish physiological study on the salmon homing mechanism using lacustrine sockeye salmon as a lake model system; (2) a environmental biological study to correlate conservation of the lake environment with the control of fisheries production; and, (3) a biosystematics’ study on the freshwater microalgae in lakes and marshes of Hokkaido. 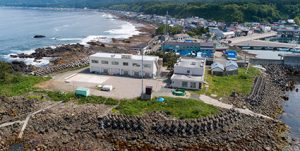 Usujiri Fisheries Station (ca. 0.4 ha) was established in 1970 at the mouth of Funka Bay in the southern part of Hokkaido as a marine biological research station for the Faculty of Fisheries, Hokkaido University. The station is 40 km (about an hour drive) from the Faculty of Fisheries located in Hakodate, and has a laboratory, dormitory, and guesthouse for long-term guests. There are 74 beds in the dormitory and 3 in the guesthouse. The waters in front of the station are strongly influenced by the Chishima Cold Current, and much of the research at the station focuses on cold-water species (temperature range: 2.6-19.1°C). There are many kinds of tanks to keep a variety of species ranging in size from small invertebrates to dolphins and scuba equipment is available for diving researchers. Three PCR are set up for general molecular experiments. The number of visiting researchers has increased during the last ten years. In 2013, more than 5,000 people studied at the station, making it one of the busiest fisheries laboratories in Japan. 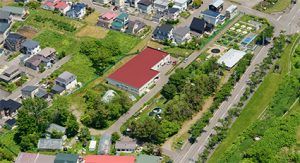 This station was created in 1940 as a fish-culture site by the Hakodate Higher Fisheries College, and was established as a fish-culture experimental station in 1966 by the present day Faculty of Fishery Science, Hokkaido University. This Station is located in a suburb of Hakodate, in southern Hokkaido, about 10km from the Hakodate campus of Hokkaido University. The facilities include, experimental ponds, two wells for water and a research building, which was renovated during 2014. Research and educational activities are conducted on the fish reproduction and the preservation of genetic resources of salmonids fishes. Genetic resources of salmonids comprise 12 species, including 19 strains. Aquaculture techniques for the Japanese huchen were successfully developed here. During the station’s history, the life history of the masu salmon in Hokkaido and pioneering work on fish chromosome set manipulation have been done. Biochemical studies of endocrine disturbing substance have also been done. Students and researchers use the station for experiments on the aquaculture of salmonid fish and short-term experiments in areas such as fish reproduction, embryology, behavior, disease and feed. Fish and their eggs are available to researchers. 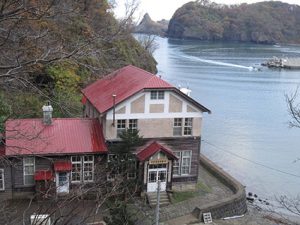 The station was founded as a facility of the Faculty of Fisheries, Tohoku University in 1908, and is the second oldest marine station in Japan. It is located in Oshoro Bay, a small bay about 15 km southwest of Otaru City. The bay is located in the inner part of the Ishikari Bay where the warm Tsushima Current prevails during summer to autumn and the cold Liman Current is mixed with coastal water from winter to spring. The water temperature ranges between 5-22℃ through the year, and tidal levels are stable. The station is located near a small exposed shore reef and conditions are relatively calm during strong winds, This area is a good habitat for many marine organisms, such as invertebrates, fishes, and seaweeds, which makes it suitable for conducting rearing experiments for these organisms, seawater monitoring, and plankton sampling. A stuff of the marine station works on kelp, and many researchers and students from the Sapporo and Hakodate campuses use the station to carry out ecological and taxonomical research, as well as chemical analyses.