The 3rd JAMBIO International Symposium, organised by JAMBIO (Japanese Association of Marine Biology) in collaboration with the Tsukuba Global Science Week and the International Educational and Research Laboratory Program, (University of Tsukuba), was held on September 21st, 2016 at the University of Tsukuba, Tokyo Campus.
The theme of the symposium was “Ocean Acidification and Biodiversity Loss –Global and Regional Approaches by Marine Stations”. The symposium included four speakers from overseas and three speakers from Japan, who each presented data on their ongoing research related to the theme.

The symposium was divided into two sessions. The theme of the first session was “Biodiversity Conservation and the Roles of Marine Stations”. The first speaker Dr. Michael Thorndyke emphasised that the cooperation of marine stations, where each station is located in its unique environment, is essential for the development of marine biology. Dr. Hiroaki Nakano presented a case study in which an ongoing cooperative project among Japanese marine stations and marine biologists has led to the discovery of over 50 undescribed species so far. The third speaker, Dr. Nancy Knowlton, described her project on an extensive and global survey of coastal biodiversity, by installing standardised observational equipment worldwide. She then went on to highlight the importance of building a global network of marine biologists.

In the second session ‘Ocean Acidification’, many case studies and new results were presented from a combination of field and laboratory experiments. The fourth speaker, Dr. Jason Hall-Spencer, showed that the ecosystem-level effects of ocean acidification can be investigated in the field using naturally occurring CO2 seeps. Dr. Takeo Hama presented some practical examples from laboratory experiments on the effects of acidification on phytoplankton communities. Dr. Katsunori Kimoto, the sixth speaker, suggested that by analysing past ocean acidification events in the geological record, it may be possible to predict the future effects of ocean acidification. Lastly, Dr. Marco Milazzo introduced some new case studies using CO2 seeps to investigate the role of biological complexity, and stressed the importance of further research to mitigate the impacts of ocean acidification.
In the evening a banquet was held, where the participants engaged in lively discussions. This included discussions about establishing future research collaborations, and it is hoped that this symposium will prompt a range of exciting international research activities as a result. 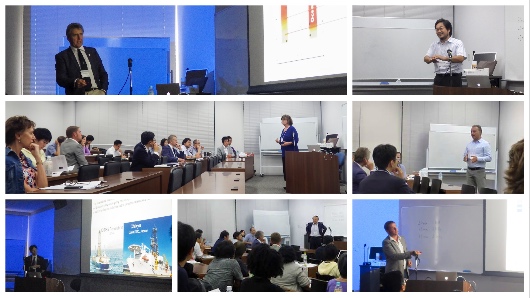