The 2nd JAMBIO forum was held on January 21st, 2011 at Shimoda Marine Research Center with participants from Sweden, Hawaii, and many Japanese marine stations and universities. A wide range of marine research was presented, from genomic studies to field observations, and active discussions took place among the participating scientists.

10 researchers presented their studies at the forum. Dr. Mike Thorndyke talked about the effect of acidified seawater on larval development of marine invertebrates. Ocean acidification is one of the impacts of anthropogenic climate change, to which marine ecosystems are now confronting, and these studies shall provide valuable information in estimating the global effects of ocean acidification. Dr. Thorndyke also talked about the importance of cooperation between marine stations worldwide and introduced WAMS, the World Association of Marine Stations.

The Nobel Prize in Chemistry for 2008 was awarded to the finding of green fluorescent protein (GFP) from jerry fish. This protein, now one of the most important tools used in contemporary bioscience, was first found at a marine station. This is just one of the examples which marine stations proved extremely valuable for not only basic sciences, but applied sciences as well. Concerning marine organisms, numerous unidentified species are expected to exist and many unknown proteins and physiological phenomena are still waiting to be found. The interactions and collaborations among scientists worldwide from many distinctive areas of marine sciences, born from opportunities such as this forum, are expected to generate new science frontiers, providing valuable insights for both basic and applied sciences. 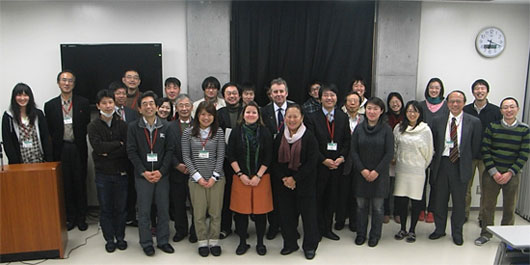